What made everything even worse was the hunger. The property of many Catholic families was taken away and the families were arrested and deported as “dangerous social elements.” From 1930 to 1931, 381000 families (1.8 million people) including 64000 Catholics were deported to Siberia[i]. Authorities were especially cruel to those who protested against closing churches or collectivization. This is what witnesses remember: “What happened to us in the 1930s happened to everyone else as well. My Father didn’t go to kolkhoz, because he said he did not want to give his soul to Satan, and for that they took everything from us, even half of the kilogram of beans. They took everything and

Not only did they take people away from families, but they also viewed them as enemies, humiliated them, and destroyed the union. Here is another example: “They looked for enemies among us. They forced people to go from one street to another, entering houses and taking everything they could take. One day my dad saw that militias were coming towards our house; my mother put a bandage around his head and told him to lay down. They entered the house and asked my mom: “Is Lishchynskyi sick?” Then they told her to follow them to their neighbor’s house and told her to take their cow. She refused, saying that she was afraid to do that. Then the soldier told her to do something “easier” – take away their grain. You can only imagine what such actions provoked in the soul of that person. It was only because she was teaching the children from that family how to cook that they remained in good relationship with her”[i]. 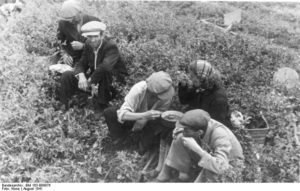 These events were especially intense during the period from November of 1932 until June 1933. Data shows approximately 7 million victims, especially in Ukraine, Kazakhstan, North Caucasus, and in such Russian regions as lower Volga. “There is no book that could express pain, suffering and losses of the people during that time”.

Every family was fighting hunger. They had to eat potatoes found in the field, or already spoiled. It was peeled, dried and made into flour to be used for baking. Such food provoked heartburn, ulcers, and very often even death, especially among children. Some people gathered clover to cook. When Father arrived home from kolkhoz, the whole family sat down to eat dinner. They were eating very fast, stomach bloated, but it was empty. “A child gathered flowers in the field and ate them. One time he ate a horse dung and soon he died. There were horrible stories of how near the village Pavlivske parents were eating their own children. Children were especially impressed by this story. Many of them had to eat dogs, cats and dead horses.”[i]

Olena Kvasniuk from the village Pidlisnyi Makariv: “Nobody came to visit us or entered our house, where 5 children were dying of hunger. We saw two of them die. They left us with only walls, but thank God we had a place to live. We had a few sacks of chaff for the horse. Luckily for us they didn’t find it. That was what we were eating. In December my sister got ill with meningitis. My Father went to the doctor because he wanted to save her, but we didn’t have the money and so nobody wanted to treat her. On December 28 she died. Father went to kolkhoz to ask for a horse so we could take her to the cemetery in town. After that he became very ill and on May 16th of that year he died”[ii].

“With all these hungry people that are eating human bodies when streets are covered with thousands of cadavers, now and only now we can and must confiscate the property of the Church with cruelty and brutal energy. Only now we can be supported by the big part of farmers, because they will be able to get bread for them, when they sell treasures of monasteries. Without them it would be impossible to make the goal of the country real, to renew our economy and strengthen our positions. So the more priests we shoot, the better for us. We need to immediately teach the people not to protest for a long time[iii]. (Stalin).