Government policy has led to the elimination of monasteries and male and female monastic houses. After the war, representatives of Franciscan, Jesuit and Capuchin orders who lived in the territory of Ukraine were. S. Kashuba, G. Wilk (Capuchins), V. Dazycki (Friars Minor), and in the 80s, B. Vanags (Cong. Of Mary) joined them. These priests with different life destinies lived in different parishes, as superiors, and only some trustees knew who they really were. Secret monastic life had its own peculiarities: monastic garb was replaced with a civilian; priests worked as doctors, nurses, accountants, and also simple workers, and at the same time secretly carried out their duties. Their pastoral work is their contribution to the Church in Ukraine. Thanks to their heroic work, today in this area there are many religious orders and many new vocations that appeared which may be attributed to their loyalty to their vocations, as evidenced by these examples: “When I was in Siberia, we were told that there were three sisters in prison. They were under a special watch because they prayed. The warden was a horrible person and wanted them to renounce their prayer and faith. He separated the nuns for a few days, but they did not cease to pray. Then he said: “Come out in the cold and you will freeze to death”. On one cold day he put nuns outside (-60 C °) naked and barefoot, and ordered all prisoners to watch, because he swore that after half an hour the nuns would die. The sisters knelt to pray a rosary. As half an hour passed not only they did not freeze, but also to the great surprise of the warden, they continued praying aloud. Enraged, the warden released three hungry dogs to tear them apart, but the dogs came back to the soldier, not harming sisters. Then the prisoners began to sing and shout, “Thank God!” The soldiers ordered the sisters to go back to prison. And from that point in time sisters were allowed to pray with people as much as they desired.”[i]

“I remember – says sister Leokadiya of the Congregation of the Daughters of the Purest Heart of the Blessed Virgin Mary – how one day in 1961, our sister died. People gathered around the tomb, chanting and praying. We, the sisters, secreted a priest into a room on the top floor and shut the window, so no one would notice. Holy Mass was served without singing. For several years we had been copying Catechism by hand, and we called it katehyzmivky. We wrote thousands of them. I think we could cover the entire Belarus and Ukraine with them! But it was not enough. Priests asked for more. Although all the sisters had jobs, some of them wrote at night. To write during the day, we tied a goat in front of the house to be our guard. When we heard a noise we hid everything. We did not have a phone. Priests called us at work through trustees. They said, for example: “Can you bring me a Vitamin C? I need it urgently. ” I asked: “Imported or domestic?” Domestic meant Catechism written in Ukrainian, and under imported – in Polish. Or they asked for domestic vitamin for export, which meant: in Polish, but in Ukrainian letters. The priest, who served three years in prison, taught me: deny everything and have no evidence for accusation. If you start to argue you will lose! Ms. Tonya’s priest’s sister hid the copies in bed and covered them with a blanket. Snoops searched the whole house, but they did not come close to the bed. God closed their eyes. We created new houses for our congregation, accepted people into the novitiate, made vows – we did it all at night, at home or in the temple”[ii].

The nuns taught cathechesis; prepared children and adults for baptism, confession, marriage; cared for the sick; helped those who were alone; secretly organized liturgies and informed the faithful about them; distributed religious literature; and took care of the Holy Sacrament. In exceptional cases, they replaced priests in pastoral service, looking for new forms of religious practices that would fit to the local situation and opportunities. Nuns fully devoted themselves to the development of life with sacraments, giving out Holy Communion. During the preparation for First Communion, nuns often had to hide from police. Here is an example from a parish in Bar, where Sister Petronelia Grabchak prepared children for First Communion in the 80s. One morning there were 14 children at the catechesis in church. The father of one girl was against religious education and told the police on the nun. When the police came, the church was locked. They went to the presbytery and ordered the door opened. When the pastor of the parish led them to the shrine, one man ran through a secret passage to warn about the arrival of the police. Sister managed to escape with the children through the bell tower of the church. The police saw the running children through the window and ran after them. The fugitives were just able to lock the door when the police came and started demanding them open it, otherwise they would break in. The children were scared. The police waited almost all day, for them to come out. The news quickly spread through the town and people began to gather at the church. The organist was playing so loudly that the persecutors had to leave the choir and go down to the entrance. The pastor of the parish came through the secret passage to the bell tower where the children hid, and with great difficulty managed to bring children into the sacristy. Meanwhile, the church filled with the faithful who mingled with and children who came down from the bell tower and thus were able to avoid arrest.

Sister Rosalia Zielinska, “As a child I have seen how the Bolsheviks tore the gold from icons of Mary and Jesus located above the main altar, confiscating and taking away everything that seemed golden: chalices, church tabernacle, etc. In 1925, at the age of seven, I came to Poland; the fear of persecution has already imprinted in my memory. A view of the church in Vinnytsia stayed in my heart for a lifetime. The church tabernacle with a sanctuary lamp of the Most Holy, the place, the most important place was ruined. The only desire of my heart was to have this lamp always burning, for Jesus Christ to live. I always prayed for it. Today I am thanking God because all my wishes came true. I am 82 years old, I can barely see, but now, just as Saint Simeon did, I can say, “Today, God, can you let your servant go in peace!'”[iii]

“Jesus was everything for us. Actually, everything was done for him. We got up early for the morning service and meditation; prayer at noon, if we were not too far from home. Within an hour we had time to eat and pray. Also in the evening, around ten, after supper, we prayed the evening prayer and other prayers of the Congregation. I prayed on a rosary and individually read spiritual literature. For Adoration we gathered together. From 1983 to 1991 this work to glorify God was my salvation. The Lord gave me strength, and the Holy Spirit illuminated me. I wanted to be everything I could for God,”- says Sister Julia Yasynetska.[iv] 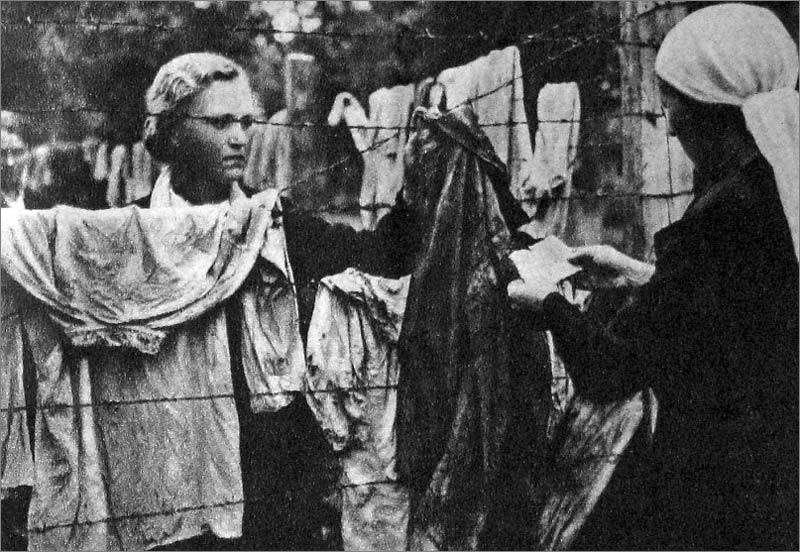