XIV. History and restoration of the monastery and church in Tyvriv 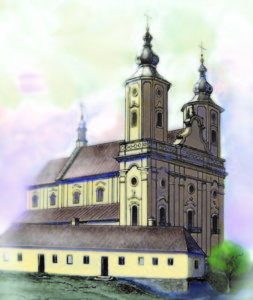 The history of Tyvriv Cathedral is closely linked with the history of the town. The cathedral and its sub terrene that barely were studied are most likely the only things that remind Tyvriv about its past.

The first information about Tyvriv goes back to 1505. It was then that the Bratslav landowner Fedko Dashkevych was given the privilege by the Grand Duke of Lithuania, Alexander, that confirmed his ownership of Tyvriv. He received that from the Vytautas for the good service of his ancestor Herman Dashkevich in the 14th century.

The Kuchmanskyy trail next to the town made it an outpost in the eastern part of the Great Duchy of Lithuania or the Polish–Lithuanian Commonwealth, but these facts didn’t do any good to Tyvriv, which fell victim to raids, colonization, robbery and wars. One of the local microtoponyms says about human memory: a ford on the Bug is called “Tatar”. Probably, that’s when Tivriv began to grow not only in width but in depth: through underground passages, some of which are still there today, residents of Tyvriv fled into the surrounding woods, when Tatars suddenly appeared at the gate.

When visits from Eastern intruders stopped, the city began to prosper and grow. The fertile black soil of Podillia ensured luxurious harvests of wheat, which were exported to Danzig.

The history of Tyvriv cathedral goes back to 1569 with records of a wooden Roman Catholic church, which the Cossacks burned during times of the Uprising of Khmelnytskyi. 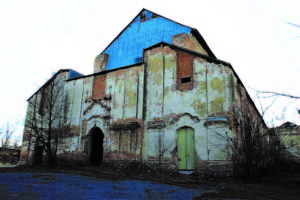 The owners of this place changed. In 1590, Mariana Yaroshynska brought Tivriv and its surroundings as dowry to her husband Sebastian Kaletynskyi. Since then the town and surrounding areas for many years were owned by the Kaletynskyy family.

In 1739, while in Czestochowa, Mr. Kaletynski unknowingly bought a copy of the icon of Our Lady of Czestochowa from a poor woman, and when he brought it home, he put in his dining room.

Next year (1740) the artist Ivan Nykulenko and a Jewish tailor came to Kaletynski, and settled to their work in the dining room, where the icon was. While working, they suddenly noticed that the icon exhibited an extraordinary radiance. This radiance was then seen by the landowner and a local priest and others. After it was investigated by a special commission led by the bishop of Lutsk in 1742, it was declared miraculous. Historians believe that because of that, Michailo Kaletynski began in 1742 to build a church on the site of the old, burnt one, donating 50 000 PLN, in addition to building materials. And in two years Tyvriv received the status of a small town.

At the same time, Mr. Kaletynski sent for the Prior of the Vinnitsa Dominicans and announced his desire to build Dominican monastery near a church. Four monks were immediately accommodated in the church. Although Michailo did not live to see the construction finished (it was finally completed in 1760), before his death he added another 50 000 PLN, including 5,000 PLN for a hospital for six poor elders, and the rest for the maintenance of the church. Zachariy Yaroshynskyi finished building the monastery. He generously gifted monasteries and churches, so that the monks rightly called him their “Father and benefactor”

In 1795, the royal government conducted a census for the purpose of imposing a poll tax. With this data we discovered the number of monks in Tyvriv Dominican monastery, which was a part of the Diocese of Lutsk – there were seven monks. The total number of parishioners, according to the data in 1797 was 1711 people. It is also worth mentioning the monastery parish school, which has existed since 1812.

In 1832 the monastery was among the 10 monasteries in Podillia scheduled for closing by royal decree, as the clergy of Tyvriv monastery were involved with the Polish insurrection against Tsarat in 1830 – 1831. They were involved simply by hiding rebels, who fled here through underground tunnels that led from every village in the Tyvtiv region and from the monastery to Vinnitsa under the Bug River. Catacombs were made with bricks and they were so wide that two chariots could easily pass by.

As for the exterior of the church, there is the picture by Napoleon Orda from around 1871, which depicts the church with the palace by the River South Bug. The magazine “Istoricheskiy vestnik” in 1912 said: “When entering the town, the first site you see is the sharp high bell tower of the church, which reigns over all the other buildings”.

The son of Zachariy built the Grand Palace next to the Monastery and established a park. For years, the city had two dominant architectural buildings: the Dominican Monastery and the homestead of Yaroshinskiy. There were at that time several churches and a synagogue in the town.

It’s hard to believe that once travelers admired the Tyvriv Monastery while crossing the Bug. But in 1898 there was a fire that completely destroyed the central part as well as the facade, decorated with a colonnade, and cloister.

The Church – points out famous historian D.V. Malykov – a basilica with two towers on the front and a small Flèche on the crest of a high roof – was seen from a distance, from the road that was between fields to the steep rocky banks of the Bug. Here, at the crossing, where all the attention was attracted to the river and a wooden bridge, and on the street, which was slowly rising on the river hill, the church disappeared from sight and appeared again, at the top, behind the manor, impressing the imagination with its heavy, huge body.

The luxury of the interior of the church once stood out; particularly unusual was the carved pulpit, which depicted the allegorical “rescue ship” – with masts, sails and even nets – a layout of Noah’s ark, carved of wood by masters of Warsaw. Also with money that Mychailo donated, from Poland was acquired valuable utensils of gold, a beautiful 360-pipe organ. Visitors’ eyes fall to the tombstone of white marble set for Czeslaw and Tekla from Kamenski-Yaroshynski by their son Henryk. This monument, created in Rome in 1856 by Pietro Teheran, depicted a seated angel with a 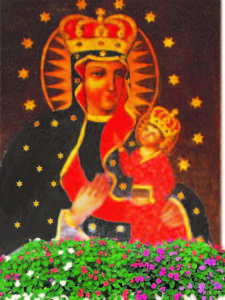 sorrowful face, hair that falls to his shoulders, and lowered down wings. In his hand, the angel holds a trumpet, in order to call to the dead at the last judgment. Under the angel on the sarcophagus, were carved faces of both Yaroshinskis.

But the greatest value was the miraculous icon of Our Lady, decorated with precious stones and numerous jewels; each of them given in gratitude for healing. Prominent Ukrainian-Polish historian Anthony Joseph Rolle wrote in a liturgical memorial of the Our Lady of Czestochowa icon in Tivriv, that many pilgrims from different cities came to Tyvriv. They came from Podillia, Volhyn, Kyiv and other provinces, because the icon had the ability to heal even the seriously ill and crippled. Remarkably, in honor of the Icon, people have written songs and prayers.